Katerina Nitsou is a Macedonian born in Toronto, with parents who come from Aegean Macedonia. Her grandparents emigrated to Canada in the 1920s from the village of Breznica. Growing up in a close-knit local Macedonian community, Kat learned from an early age about the Macedonian history, music and tradition, all interwoven with the food the Macedonian women prepared for every occasion.

At the age of 23, she moved from Toronto to Los Angeles with her current husband Oliver Fitzgerald and began a new life that lasted 15 years, before the family moved to Melbourne in 2020. In LA she started from scratch, without friends and community around her, so to fill in her time she attended several courses, including culinary. 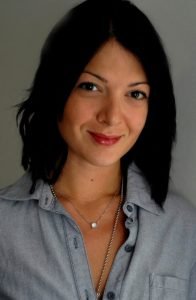 During those 15 years, Kat wrote, tested, and photographed recipes in the Los Angeles Times’ test kitchen, as well as styling food for many brands. Her personal recipes were also published in the LA Times, and in the meantime she founded her own private food and cooking company and within those 5 years of work she had the privilege of cooking for many celebrities in LA.

She currently lives and works in Melbourne, her husband Oliver’s hometown, and as she says, she is overjoyed that the Cookbook has finally been published, because all her heart and soul are poured into it and it is a record of everything she does, of herself and her family.

The book can  be ordered through this link.

What was it like growing up as a Macedonian in Toronto and were you more connected to your heritage when you were younger or that connection more present now?

Katerina: My family was very immersed in the Macedonian community in Toronto. It was a great place to be because there were a lot of opportunities to connect with the Macedonian culture through music, dance and food. We were often attending various picnics and dances, fundraisers and functions hosted by different villages and families.

We spent a lot of time with our extended family who had all migrated to Canada, so it was very easy to feel connected to the Macedonian heritage. Toronto has a very strong population of Macedonians, so it was easy to be immersed because there was always something going on. As children we were all taught to speak Macedonian, learn Macedonian dancing, learn about the history and the food and understand the traditions that were a part of our ancestry. What seemed a “normal, everyday activity” for your mother, grandmother and aunts, turned out to be your (first) creative expression in life. Did you like cooking while you were still living in Toronto or that passion came later, when you enrolled at the cooking course in Los Angeles?

Katerina: I enjoyed cooking from a very young age, I have a strong creative spirit and have always enjoyed creating things with my hands. When we were young, we didn’t cook in the kitchen on a day-to-day basis but from a very young age we were encouraged to participate on the weekends and for holidays. We would prepare cookies at Christmas and Easter bread at Easter, and we would often help in our own kitchen and our relatives’ kitchens when we would gather together.

There is something nurturing about a multi-generational approach to food. Being in the kitchen together with my family was some of the fondest memories of my childhood.  Even when writing the book and testing the recipes I felt very connected to my ancestry even cooking alone in my kitchen. Before moving to Melbourne a year ago, you and your husband Oliver spent 15 years in Los Angeles. You finished the Business degree you started in Toronto, got married, enrolled the cooking course and had your kids there. Which one of these transformations was the most difficult to accept as an individual?

Katerina: I think in the journey of my own life, I’ve had to establish resiliency and independence. I left my home in Toronto and moved to LA not knowing anyone but Oliver. It took time to feel connected. It took time to make friends and establish a community. I spent a lot of time alone which was not something I was accustomed to, growing up in a large bustling family and with wonderful childhood friends.

We had a rich and beautiful life in Los Angeles and it many ways it feels more like home to me than Toronto does. With our recent move to Melbourne, it is sort of going through the same thing. A bit easier perhaps being my husband’s family is here and some friends he grew up with, but still I am working on building my own tribe and establishing myself in a new place. You have to be like water in life, fluid and willing to carve your own path. I think all the separation from my family is what may have kept me writing the book over the many years it took us to do. It was my connection to home. I love hosting people and now am studying interior design which I had done in Los Angeles and looking forward to getting into the residential sector.

It all ties together for me with the root being the concept of the home. Everything that brings us joy in our home is what excited me most. Perhaps it is because I left the sphere of my family at such a young age. Now with my own young children I try to immerse them into the type of childhood I had. Full of family and friends, good food and a bustling environment.

“Macedonia – The cookbook” was born as an idea of recording in a simple, yet elegant way, all the recipes you’ve seen, learnt and done in your life growing up as part of the Macedonian community in Toronto, your husband Oliver being the photographer. How much cooking did it take to do all the dishes in the book?

Katerina: The process to complete the book was very long. A first I prepared a frame work of where each recipe would sit in which chapter and then I began to write about each one. This in itself took months. As I was writing I would begin to test the recipes. This took time because when I cook, I typically go by feel, I had to take this way of cooking and quantify it so that my pinch of this and handful of that would equate to a measurement. Then once I felt that the recipe was right, I would make it and Oliver would photograph it. Sometimes the photography would be great and other time we would have to re-make it and re-shoot it sometimes as often as 3-4 times. We didn’t really have money to invest in props and backdrops so we got really scrappy like going to stoneyards in North Hollywood and asking for offcuts of stone so we could use them as “table tops.” We scoured textile places in the Garment district and tested many different paint colours and all kinds of wood surfaces.

We then when through a rigorous editing process and while doing this we had to comb through the approximate 30,000 images we had photographed of food to come up with one image for each dish. Looking back on it, it was complete madness but we are thrilled with the end result and the years of working on it and seeing it published was one of the most rewarding accomplishments of our lives.

Most of the food you were cooking was eaten at home, but you also mentioned you were giving meals out to homeless people in LA. Did you ever receive their feedback for your Macedonian dishes?

Katerina: It would have been nice to get their feedback but unfortunately that wasn’t possible. The transient nature didn’t allow for much of that but many of our friends in LA loved when we would be testing.

How long did it take in total and what was the most difficult part in the creating and publishing process of this book?

Katerina: Our journey was unique in that we had completely written the book before getting a publishing deal. Often times what happens is a author/chef is given a grant to write a book but in our case we just decided to create it and see what happens. It was a good way for us because we weren’t on a time constraint or pressure so we could really flush through every detail. We started writing the book in 2009 so it has been a long road to get to where we are today, but I am proud of our persistence to see it through.

Are you more inclined into cooking savoury or sweet dishes, and what are your favourite ones?

Katerina: I tend to gravitate to cooking savory dishes although I do really enjoy baking. Typically when I host people for dinner I always prefer to cook the entire meal and leave the dessert to them or I’m known for just breaking out an array of cookies and chocolates on a board with fruit sort of like a cheese board and keeping it really casual.

You arrived in Melbourne in June 2020 with literally the last plane before the international borders closed down and all the flights got diverted. Nearly 2 years in and a lot of lockdowns and home schooling: do you think you did the right thing or still trying to find the meaning behind all these events?

Katerina: We had made the decision to move to Melbourne well before the pandemic and just had to just adjust like everyone else. We had a big life in LA and it was hard to leave without a proper goodbye and coming to Melbourne was challenging and trying to set up a life when everything is shut down wasn’t easy but we have come into a beautiful little and growing life. My pain of not being there is more centred around missing family and friends more than anything else, but I’m happy for my children to be growing up in Melbourne. It is a great place to raise children.

Both of your parents are from the Aegean Macedonia. Did they share their life stories with you while growing up and how much of that stayed within your identity?

Katerina: Yes, my parents were really open about sharing a lot of their life story. I think the knowledge and what they had to endure – especially my father – really shaped the woman I am today. Even though I grew up in Canada I was very aware and influenced by the stories of my parents and my grandparent’s birthplace. My father documented his life’s story during the many months of Covid pandemic. It was a wonderful opportunity for him to write down and recap his life and with my mother’s help they put together an amazing manuscript for our family to cherish. I am so grateful that he has done this, because although I know many of the stories from his past, there are so many I didn’t realize or that he may have chosen to shield us from. Now it is all written down, so I can share it with my children when they are older and they with their children should they decide to have any of their own.